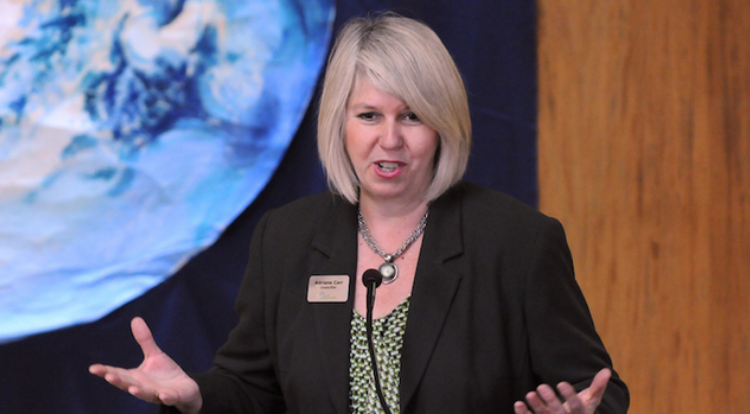 Born in Vancouver to immigrant parents, Adriane Carr earned her M.A. in Urban Geography from UBC, and an ARCT degree in teaching piano. She taught Geography for 12 years at Langara College where, elected to the faculty union, she helped save all jobs during a time of severe government cuts. She left teaching to join the Wilderness Committee’s executive team in 1989. From 1993 to 2000 Carr served at the request of the Nuu-chah-nulth Tribal Council Central Region Chiefs, as liaison between them and environment groups to help lead efforts to resolve the conflict over old-growth logging in Clayoquot Sound.

In 1983, Carr co-founded the Green Party of British Columbia, North America’s first Green Party, serving as its first spokesperson and then as elected Leader from 2000 until 2006 when Elizabeth May, Leader of the Green Party of Canada, appointed her as her Deputy Leader and co-chair of Shadow Cabinet. She was elected as Vancouver’s first Green Party City Councillor in 2011, and re-elected in 2014 and 2018 with more votes than any Vancouver City Councillor in history. She currently chairs Council’s Policy and Strategic Priorities Committee, and represents Council on 3 advisory committees, Vancouver’s UNDRIP Task Force, and Metro Vancouver’s Zero Emissions Innovation Centre. She also represents Vancouver on Metro Vancouver’s Board of Directors and Finance Committee, and Chairs Metro’s Climate Action Committee.

Carr will continue leading work she’s initiated to improve housing affordability, reduce our city’s GHGs to achieve what scientists say is needed to avoid climate catastrophe, ensure Vancouver’s COVID recovery is both just and green, and genuinely engage the people of Vancouver in creating a vibrant, resilient and livable city. She has two children, two young grandchildren, and lives in the West End with her husband, Paul George.