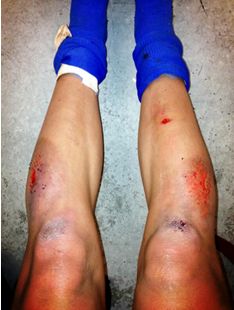 FIFA and CSA have acknowledged that grass, which is known to offer superior playing conditions and prevent horrific injuries for soccer players [see link to report below], is the preferred pitch for men. Serwetnyk and other elite women soccer players are currently involved in a legal case before an Ontario Human Rights Tribunal based on discrimination against women for forcing them to play on artificial turf.

“The idea that turf is used for a World Cup demonstrates such a lack of understanding for the game at a high level,” says Serwetnyk, referring to Vision’s support for artificial turf.

“This shouldn’t be about partisan politics or closed door handshakes. It should be about city officials clearly seeing this is discrimination and stepping up to create a peak performance event for women on the global stage.”

Green Vancouver City Council candidate, Cleta Brown, a lawyer formerly with the Office of the Ombudsman of BC, agrees.

“When it comes to women's equality and resisting discrimination against women, Councillor Carr clearly stands alone on Council,” she says.

“Vision could have demonstrated their support for women's soccer and their legitimate complaint at the Human Rights Tribunal by voting for Councillor Carr's motion. Instead, when faced with a choice between actively supporting women and fairness versus playing partisan political games, Reimer and company chose the latter.”

While it was FIFA that made the decision for turf, Carr urged the City to step up to the plate and level the playing field for women.

But Carr’s motion presented to City Council October 28 was quashed by Reimer, who asked for a staff report based on her estimates that costs of installing grass playing fields across Canada was $78 million — a figure described as “farcical and contain[ing] numerous transparent mistakes” by Rocky Collis, attorney for the Human Rights case.

“All Vision is focused on here is money instead of justice for women. They could have simply amended my motion if they were committed to equal playing conditions.”

The full legal brief drawn up by the lawyers representing the elite women soccer players who will be participating in the FIFA Women’s World Cup Canada 2015 in their challenge before the Human Rights Tribunal of Ontario to the decision to hold the tournament on artificial turf fields is available here.

“The attorneys for the coalition of players seeking an equal playing field for next year’s World Cup share Coun. Reimer’s attention to potential costs.  For that reason, we conducted extensive due diligence into the feasibility of grass solutions prior to filing the players’ application to the Ontario Human Rights Tribunal.  We released a proposal on October 9, with the help of numerous grass experts from Canada and the U.S., which estimated the costs to outfit all six fields with premier, temporary grass, at $3.35 Million.

Coun. Reimer’s estimate of $78 Million is farcical and contains numerous transparent mistakes.  Principally, the Councillor assumes that the same method used for a single game (Manchester City at Empire Field) would be used for a tournament with multiple games.  Grass experts across Canada and the United States would tell the Councillor: there is a better way.  If a proper base is laid beneath the sod, then the sod can continue to grow while inside the stadiums.  This eliminates the need to replace the grass fields, as Coun. Reimer mistakenly claimed would be necessary.  This method has been used at previous men’s and women’s World Cups, so there is no need for the Councillor to try to reinvent the wheel at a higher cost.

Next year’s World Cup risks the global reputation of both women’s sports and the City of Vancouver.  Therefore, we respectfully encourage Coun. Reimer to devote her time to urging CSA to negotiate with the players they will be hosting.”