The Green Party of Vancouver this morning nominated three candidates to run in the October 14 by-election to replace the Vancouver School Board dismissed by the previous provincial government.

Vying to be elected to one of the nine trustee positions will be former trustee Dr. Janet Fraser, health and wellness consultant Estrellita (Estie) Gonzalez, and educator Dr. Judy Zaichkowsky.

In accepting the nomination Fraser said: “I am seeking the opportunity to once again serve Vancouver's students. My commitment to students, hard work and integrity were evident during my two years as a trustee. I will use all my experience and expertise to work respectfully with trustees, stakeholders, staff, and the provincial government to address the many challenges and opportunities facing our school district.” 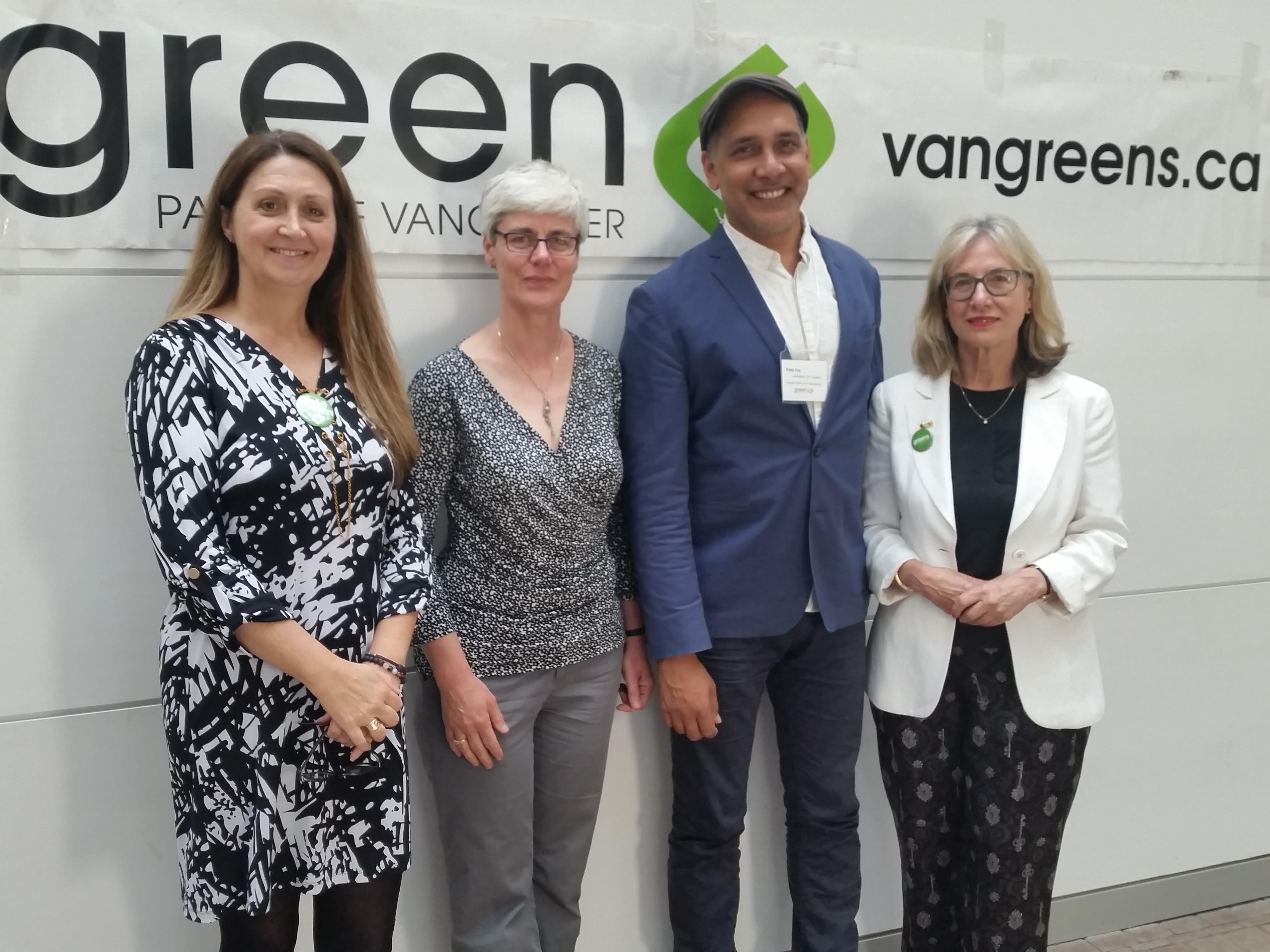 Political newcomer Gonzalez stated: “I am proud to be representing the Green Party of Vancouver as a trustee candidate in the upcoming by-election. This is a critical time in education; there are challenges that require collaborative approaches and solutions so that our kids are well served today and prepared for their futures.

Zaichkowsky, also a new face on the political scene, said: “I am seeking a seat as a trustee with the Green Party of Vancouver to support good governance and principles of the Green Party for our society. As a life-long member of the Vancouver community and education system, my aim is to bring integrity, value, and inclusion to the school board.”

Following the nomination of the three candidates, Green City Councillor Adriane Carr stated: "I'm very proud of the leadership and principled stands Janet took as a Vancouver School Board Trustee, including thinking about the needs of students both now and in the future, and moving to prevent the short-sighted sale of school lands. With two strong individuals coming forward to run with Janet, and Greens playing a key role in the new provincial government, it's a good time for Vancouver voters to elect more Greens to School Board."

Teacher and Green Park Board Commissioner Stuart Mackinnon added: "The election of a progressive Green/Democratic government in Victoria has signaled a new era in education for B.C. By calling for new elections for the Vancouver School Board they are saying that education needs to be led from where it belongs: in the communities. This October the voters of Vancouver have the opportunity to elect more Greens, which will mean more integrity, more commitment to local ideas, and more transparency. As a teacher, and as a resident, I am really excited to work to elect more Greens to the Vancouver School Board."

The by-election will be held Saturday, October 14 in conjunction with the by-election to replace former Vancouver City Councillor Geoff Meggs. The Green Party candidate for that Council seat is community advocate Pete Fry.

Dr. Janet Fraser was elected as a Vancouver School Board trustee in 2014 and served Vancouver’s students with commitment and integrity.  She worked hard to build and maintain good relationships with VSB stakeholders, staff, community partners and other levels of government.  She always made her decisions based on the best interests of students, for example not approving the 2017/18 balanced budget as the cuts too deeply impacted students and her successful motion to not sell any entire school sites.

Born and educated in the UK Fraser received BSc and PhD degrees in chemistry from the University of Bristol.  On immigrating to Canada she has worked in Vancouver as a scientist, project manager, at home parent, program administrator and trustee. Fraser and her husband live in Marpole and have three teenage children, two in Vancouver’s public schools and one in post-secondary education.  She is active in the local community and served on school PAC executives for ten years.

Estrellita (Estie) Gonzalez was born and raised in Metro Vancouver and has resided in Vancouver since 1992. She has a BBA in Human Resources Management and is a small business owner, author, speaker, and mother to an energetic and talented teenage boy. Gonzalez  has had a senior management and consulting career (HR/Marketing) in Canada and Asia. In 2012, she launched Derma Bright Clinic, a wellness centre and medispa based on her health and wellness values. As a Wellbeing speaker and writer, she passionately shares ideas on ways to detoxify your life. She is a volunteer with the CHILD Foundation, Eric Hamber Secondary’s Studio Co-Treasurer and was a VANOC NOC Assistant in 2010.

Gonzalez joined the Green Party of Vancouver because she is passionate about our planet and wellbeing for all, values she shares with the Greens. As a School Trustee she will work collaboratively so our children are well-served by a system that meets their needs and the future of our great city.

Dr. Judy Zaichkowsky was born and raised in Vancouver. She attended Sir Guy Carleton Elementary School and Killarney High School and then attended UBC for a Bachelor’s degree in Home Economics. Her first professional job was in the Vancouver Secondary School system, teaching mainly at Eric Hamber and Templeton High Schools.

She is currently a University professor of marketing in the Faculty of Business Administration, Simon Fraser University. She received her Ph.D. from UCLA in marketing, with minors in psychology and statistics. She holds a Masters degree in Consumer Studies from the University of Guelph from which she has been named a notable alumni. She has been a Big Sister here in Vancouver and also an active member of the Minerva Foundation. Her main interests in the Vancouver School Board are around the principles of health, safety, social interaction, maximum intelligence stimulation and achievement for pupils and teachers alike.

Zaichkowsky chose to join the Green party and vote Green in the last election because of their proactive approach to creating legislation which enhances the well being and equality of all British Columbians.