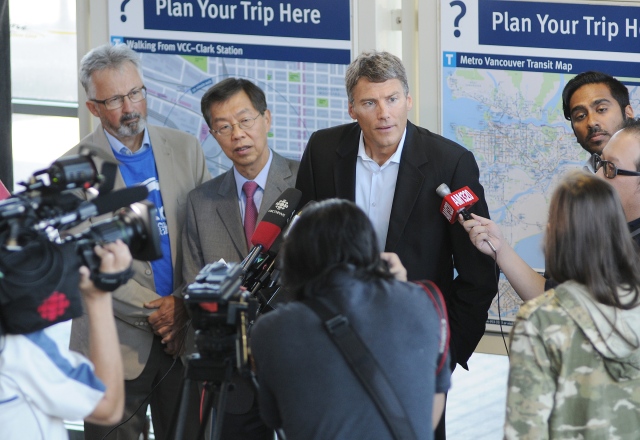 Statements regarding the proposed subway line along Broadway to UBC made by Vision Vancouver representatives — one by Mayor Robertson at a Vision Vancouver announcement of the subway in March 2013 at St. James Community Centre, and the latest made by Councillor Andrea Reimer at an all candidates meeting on October 15 at the same location — are misleading, says Councillor Adriane Carr.

“Vision representatives are not revealing that the City will have to bear significant additional costs related to the subway that other cities will not be subject to. And they’re not being honest about the fact that a subway will inevitably lead to high density development at stations along its route,” says Carr.

Funding for the first 10-year phase of a 30-year regional transit plan developed by the Translink Mayors’ Council will go to public referendum in 2015. It only includes a Broadway subway from VCC-Clark Station to Arbutus, with enhanced B-line or Bus Rapid Transit west from there.

The Translink Mayors’ Council’s plan makes no commitment to a subway west of Arbutus.

The plan states that: “the City of Vancouver will be responsible for the incremental cost associated with any additional tunneling beyond technical or functional requirements consistent with operational capacity for other rapid transit systems within TransLink”.

It also states that “contributions [from cities] may be sourced from developer or development-related mechanisms.”

“This means that City taxpayers would be on the hook for the additional cost even to tunnel to Arbutus,” says Carr. “Otherwise the line will be an above-grade sky train, as is the case in Burnaby and East Vancouver. The CACs [Community Amenity Contributions] from high-rise, high-density development will be the likely source of funds to pay the extra costs of going underground.

“So I challenge Vision to come clean on this with the citizens of Vancouver.

She adds that using development levies to pay for a subway means two things.

“There will be a real push for high-rise centres like Metrotown, Brentwood and Oakridge at subway stops, because the higher the density, the more money the City will get.

“We aren’t keeping pace on those things now, let alone trying to fund transit, too.”

Rather than put $3 billion into a 12-km subway that only serves one corridor of the city, Green Party of Vancouver Council candidates want to see Vancouver residents given real information and choices about various possible transit options; the cost of each option; and the expected impacts on development.

“For the same $3 billion being proposed for this subway, we could provide a comprehensive transit system to serve the whole city, which is so much fairer and smarter,” says Carr.

“The whole goal is that people should be no more than a five-minute walk from a well-serviced transit stop and, most importantly, that Vancouver residents be involved in making the decision.”